Our first adventure in Branson MO

We consider November 9th as the "real" starting date for full-timing since when we were parked in Peculiar MO it felt like living in a sticks and bricks because we were so close to our old home and our old routines. November 9th was our first departure for what we hoped was the start of the "vacation" lifestyle and boy was it ever like a vacation. It really was weird as the 9th approached both of us were still in the old pre-trip ritual; we need to remember to pack 'such and such' and 'this and that', only to realize that 'such and such' was already in our new home and 'this and that' was no longer needed. Our new pre-trip ritual is on a checklist that Bob downloaded and adapted to our needs and lifestyle. We dump the tanks the day before and put up the sewer hose and support and other outside duties. Most of the checklist though is done the morning of departure; not knowing how long it would take and since we were in a convoy with another couple we got up a little earlier than normal and had a quick breakfast. We went through the checklist and only had a minor issue with the fifth wheel hitch since we have only done this like 2 times ourselves. Our timing with the other couple was great though, they were turning right at our rendezvous point as we were coming towards it to turn left. We drove a couple of hours and stopped for lunch in Bolivar MO at Smith's Restaurant which is highly recommended; the meatloaf and tenderloin are can't miss items and the gooseberry and strawberry rhubarb cobblers were great!! There is a Smith's also in Collins MO that is the original but the new great road to Branson now bypasses Collins so not sure how much longer it will be open since although these bypass roads are great for travelers they can impact the businesses along the old road. There is a Camping World just east of Springfield MO that we went to next since it is a rule that all RVers have to stop at every possible Camping World. 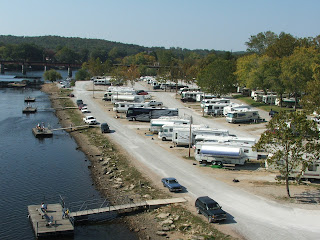 which is right on Lake Tanneycomo and within easy walking distance to the Branson Landing and the old downtown. The location is also great because you can get to it without getting on 76 Country Boulevard and a grocery store is nearby. We got checked in and found our lot and setup for a fun filled week. After a day of travel we went low key the first night and we ate chicken salad sandwiches and chips that Jo made prior to our departure.

If you have never been to Branson Landing just plan on it soon. Although it is new and a lot of the stores and restaurants are chains it is a great experience. There is a fountain area that has an hourly 'fire and water' show to music each night. 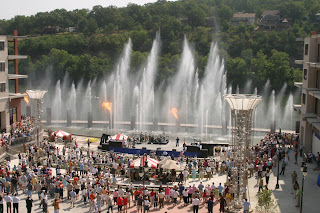 On the lower level you can walk right by the water past the White River Fish House which was so good we ate at it twice and were not disappointed either time. We liked the fried catfish sandwich and the venison meatloaf. The upper promenade is where the other stores and kiosks and restaurants are. If you get the chance get an aqua massage where you lay in a tube face down and water jets massage your entire body up to your head. After a morning walking around Branson Landing we went to one of the other main attractions of Branson, the shows. The show we picked for the four of us was SIX which has six brothers that perform all the noise you hear, from guitar to drums to horns and musical voices. They were incredible and funny, especially Jak, this is a can't miss show if you come to Branson. They really picked on Wayne Newton who tried and failed at a theater in Branson. Another great show is the other show that we saw and that was the Twelve Irish Tenors, although it was only Eleven since one of them dislocated his shoulder playing flag football and was not there. We hope he is not out for long because it could very easily be the Eleven Irish Tenors, they were that good.

As you can tell we like Branson, from the shows to the old downtown and the Branson Landing. There is a wide range of shows from Country Western to Andy Williams to Irish Tenors to a Japanese fiddler the range and talent is amazing. There are great museums like the Roy Rogers and Veterans and Silver Dollar City is nearby along with lakes and trout streams. If you are coming to Branson check the shows ahead of time because a lot of the theaters will have special guests throughout the year and when you get there get a good map and use the alternate routes to avoid the traffic.

We are also liking the lifestyle, the first morning we woke up in Branson MO with the thought that last night was in Branson but the night before was in Peculiar MO and that all of our stuff came with us making the first night adjustment a breeze. Both of us love traveling but before RV'ng neither one of us slept very well the first night we went on vacation or slept in a strange place; now it is our bed and pillow each night. We also think our cats have adjusted faster and better than we did. 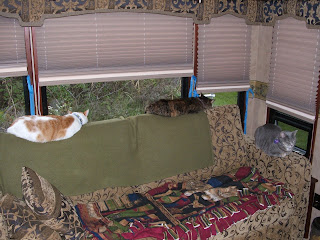 After Branson we are off to Texas which will be the subject of our next post.

You can subscribe to this blog osts and/or comments by making selections under 'Subscribe To' or you can join the yahoo grou which will notify you whenever a ost is made, htt://grous.yahoo.com/grou/bobandjotravelblog/,

You can also signu to be a Follower of this blog.

NOTE: See our hotos from laces we have visited at http://www.flickr.com/photos/bobandjotravel/sets/
Posted by Bob and Jo at 7:30 PM