When we look at a sunset in awesome wonder we are filled with joy and peace. We love taking sunset pictures across the country. 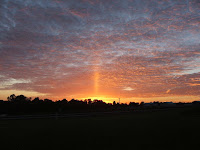 Here are a couple of our favorites. 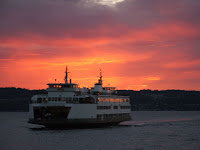 Continuing our role as tourists in our old hometown we recently saw a couple of concerts in the Kansas City area; the America's Got Talent Tour and Michael Bolton. The AGT Tour was at the Midland Theatre in downtown Kansas City MO built in 1927. In 2008 the theatre was renovated to make it more multi-purpose. What that meant for us the concert goers is that the seats on the main floor were removed along with the tiered floor. We had the misfortune of being in the last row of one of the flat sections on the man floor and it seemed like to us that it sloped upwards making seeing the stage difficult at best.

This reduced our overall enjoyment especially for the acts that you would want to see the whole stage, Patrick and Anna the young dancers, Michael Grasso the magician, and the dance troupe Young Beast Society. This was billed as the Top 10 finalists from the show and we only bought tickets since we thought Jackie Evancho, the 10 year old girl who sings opera like an angel, was going to be there since she finished 2nd. During the intro neither one of us saw Jackie on the screen but we thought we must have missed her due to all the people getting seated late. So we go through the whole show expecting Jackie to be next and then the show ended with no Jackie and we were disappointed. We enjoyed the show and not to take anything away from all of the acts because Christina and Ali, Fighting Gravity, and Michael Grimm were excellent but Jackie was the main reason we bought the tickets because we wanted to hear her in person.

We next saw Michael Bolton at Yardley Hall, the auditorium at Johnson County Community College and the differences were striking. We paid much less for the tickets and parking was also a lot less. We could have chosen to park for free but we are glad that we paid because there were a lot of students at evening classes and the free parking was quite a hassle. The acoustics were also better than the Midland. Michael sang a wide range of songs from his early ones to Sinatra tunes and vintage ones like 'Sitting on the Dock of the Bay' and an opera song "Nessum Dorma". It was an incredible concert and we were glad we went. It also made us even more disappointed that Jackie Evancho was not at the AGT Tour performance.

So caveat emptor if you are planning on seeing the AGT Tour and if you get the chance to see Michael Bolton on his tour you will see an excellent concert.

Being a tourist in your hometown

Surprisingly one of the toughest things we have found to date in our full-timing lifestyle is how to be a tourist in your hometown. 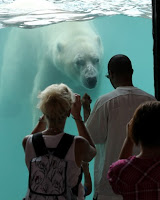 The surroundings are so familiar that we easily fell into our old routine instead of our on the road routine where we research the area before we get there and then gather info once we get there.
So we recently decided to treat the Kansas City area like a stopover on our journey instead of our home town. We may be in our home town but we have more time to see some of the sights now than when we were working. That is not to say that we have not visited the sites in the area as we have been to the Truman Presidential Library, the Kansas City Museum, the Zoo, the Steamboat Arabia and others but we haven't done much this extended visit. 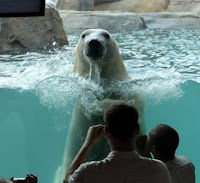 With that in mind we decided to return to the Zoo to see the new polar bear exhibit at the Kansas City Zoo, The Polar Bear Passage. We watched as the polar bear named Nikita swam in his 140,000 gallon 65 degree pool and explored the 10,000 square feet exhibit space. We were amazed at how close we were and how active he was diving underwater and then putting his paws on the glass right in front of you and pushing off and back stroking. We also saw feeding time and watched as Nikita ate some of his 25 pounds of food each day.
We hope to do more sightseeing before we head in mid-November to Arizona for the winter. For more details on what to see, eat and do in the Kansas City area you can read our blog entry, Kansas City
Till next time,
Bob and Jo