Update on progress towards fulltiming - Part 3

I had previously mentioned that the logjam of the basement had been finished. The problem with logjams is that they can re-form downstream. After almost two months the great kitchen disaster of 2008 has mostly been completed. I have a message for all those that thought someday Jo would wise up and realize what a dope I am and that would be the end of our marriage; well if we can survive the kitchen I think we can survive anything - but this did come closer than any other event has ever come.

The comedy of errors known as the great kitchen disaster of 2008 actually began a few months ago when I mistakenly thought that 23 year old appliances could be a part of the home sale. In my defense the appliances were black and stainless steel which is all the rage now, but mostly black instead of stainless instead of the current rage of mostly stainless steel. I felt that with a little spit and polish that they would be fine. As 23 year old appliances are prone to do they began failing in earnest over the last few months. As June rolled around we only had one burner on our cooktop that worked pretty good; an oven that got hotter but you never knew which temperature or how even the heat was and a microwave we were afraid to use because the next time it broke it probably could not be fixed. So for those keeping track we now have had to replace a furnace, oven/microwave built-in unit and a cooktop this year already.

As it started to heat up outside we moved our activities inside and painted the kitchen ceiling in late June. Then it was on to the wallpaper. I feel that whomever invented wallpaper should be dug up and have their bones scattered all over the four corners of the earth but first I want to dance on the grave. This is the second room where we have had to remove wallpaper and although we hate to admit it this wallpaper did come down easier than the other room. Once we tried to remove the glue though the paper on the Sheetrock starting to disintegrate so our only option was to sand the glue; a huge dusty mess even though we tried to place tarps over everything the dust got everywhere. What we did not realize was that this was going to be the small mess (more on that later).

About this time the oven/microwave was installed and the cooktop was on order. A few years ago we had Granite Transformations put a countertop around our sink and on the island with the cooktop. It took a lot of research to find a cooktop that only required slight modifications to the cutout and one that expanded the hole which was easier than making it smaller. Granite Transformations wanted the cooktop on hand so that they could measure it exactly. Now it has been said that every cloud has a silver lining and the silver lining of the great kitchen disaster of 2008 has to be the modification of the cutout; the technician was right on time, used cool tools to do the job and even attempted to cleanup after he was done even though the glue dust was everywhere. The cooktop slid right into the slot and then I began installing it.

For those that do not know this I used to be a project manager one thing that has been said about projects is that they always take longer than the estimate. Well I estimated this job to be about a couple of hours since there were only two connections to worry about; electrical and the venting for the downdraft and both were already there. We had disconnected both to get the old cooktop out so we were familiar with the setup. Projects take so much longer because of the unexpected; the electrical connection was from the front of the new unit instead of the back like the old one and the conduit would have interfered with putting pans in the island so the junction box would have to be moved. Turns out this was the easy fix because the venting for the new downdraft went in the opposite direction than that of the old. Since the space was tight it was impossible to get one elbow on each end to be able to connect. After 4 trips to various hardware stores and a few days the 2 hour job was done. A shout out needs to go to Smith Brothers hardware in Raytown. I have been in town almost 30 years and whenever I needed a part that no one else had I was able to get it there.

While dealing with the frustrations of the cooktop installation I began to use joint compound to patch all of the areas damaged by the wallpaper removal. Because of the less than stellar results of our first wallpaper and painting effort I decided to liberally apply the spackle and then sand it even. Well the last liberal thing I had done prior to this was to vote for Jimmy Carter in 1980 and that was a mistake too. I should have taken the time and built up the areas slowly instead of the mudslide effect that I used. If we thought that sanding the glue was dusty it was absolutely nothing compared to the dust raised by the sanding of the mountains of mud. The kitchen looked like China during the Olympics and we must have looked like people during the SARS scare with our masks on. So much dust was raised and moved throughout the house that I am quite sure that five years from now we will open a cabinet in our RV the dust will have followed us there. The sad part is that there were still areas that could have been better.

So we now think we are in the home stretch as all we have to do is prime and paint. As we started putting the primer on; after setting up the tarps for the umpteenth time, the primer was not adhering so it was off to Sherwin Williams. We were using latex primer since we try to avoid oil-based as much as possible and the latex was interacting with whatever glue was left over. With oil-based primer on brush and roller we proceeded to prime all the walls including all the nooks and crannies prevalent in kitchens. We then made choices to improve our coverage; darker tone of paint, different rollers, type of paint, etc. and painted the kitchen hoping we were done. We now know for sure that we are not great painters because a second coat was needed but the result was better than expected after looking at the walls after sanding.

As the paint was drying the next job tackled was the antique brass knobs throughout the kitchen which did not match the new stainless decor. Replacing all the knobs and hinges was not practical due to their unique nature and the cost. A can of spray paint to the rescue after deciding between three different varieties. We decided to leave the hinges alone and leave some brass on the knobs. I setup a painting station in the basement with nails to hang knobs on for spraying and drying since there was 42 knobs to paint.

When the second coat of paint was dry we pulled the painters tape off and began the massive cleanup so that we could put the kitchen back together. 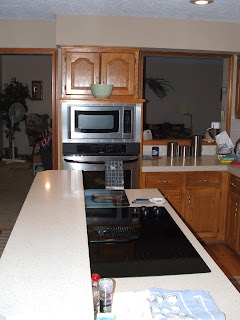 All the dishes in the cabinets had to be washed even though the cabinets were covered with tarps during sanding. As we are working room to room we are beginning the decluttering so more stuff was identified for our next garage sale. A new under cabinet light fixture for the desk in the kitchen was added and all the freshly painted knobs were put back on. A good before picture is not available but here is the after picture. We will do our final staging of the kitchen as we go out the door as well as paint the pantry.

The kitchen has not been our only activity as a huge dent has been made in our library. When cleaning out the basement I found a dozen boxes of books to go with our hundreds of books in our bookcases. My old college books were donated to Better World Books (http://www.betterworldbooks.com/) who among other things directly sent more than 1 million books to Books for Africa, the National Center for Family Literacy, and Feed the Children. Our other books will be offered to family members and then sold to Half Price bookstores.

We have started watching staging shows on HGTV and believe we will try that for ourselves and then get feedback when we interview the realtors.

Even with the setback of the great kitchen disaster of 2008 our target is still doable which is the house on the market in early spring. I was listening to Dave Ramsey recently and he thought that once the election is over and the grass starts coming up next year that the housing market will get better and that suits our timing just fine. While it is still hot we will work on going room to room (office, foyer, etc.) and then when it cools off finish up outside (deck, siding, etc.)

NOTE: See our photos from places we have visited at http://www.flickr.com/photos/bobandjotravel/sets/
Posted by Bob and Jo at 12:57 PM 1 comment: