As we were finishing up on everything that needed to be done we decided to check in with the two couples that expressed an interest in the house figuring we could do this FSBO and save Realtor fees. One of the couples said they would think about it and to call back when we were ready to show them the house. The other couple was out of town and said they would call when they got in town. They did call back a few days later and wanted to see the house the next day. Immediately about 50 more things that needed to be done sprung into our minds so we had to tell them we needed more time. It is amazing the things you have to do when someone else is going to walk through your house. Unfortunately you just cannot stuff everything into closets or the bedroom that you can close the door when entertaining. This was also just before Bob was leaving for Canada for a fishing trip (more on that later). Bob is now back from Canada and there is a few days more work to be done and then we will call those couples back. We did rent a storage unit before Bob left for Canada mostly for the stuff that will be going with us to the fifth wheel and for stuff that we will decide if we need later. Since we have gotten rid of a lot of stuff we were able to get a smaller unit at a fairly cheap price and can go month by month.

Since my last post we have pretty much finished the staging upstairs, although as we progress further we now think we may need to get professional staging advice, guess we are not as good as we thought we would be with 'accessorizing'. We did go to an RV Bootcamp as part of Escapade 2009 in Sedalia MO in late May. Escapade is a yearly gathering of members of the Escapees RV club where seminars on full-time RV'ng and product demonstrations take place. The weekend before the Escapade a Bootcamp is held for potential RV owners and newbies where system basics and a general overview of the lifestyle is given. For the most part it was fun and informative although the session on RV fires was a downer since only the negative side was given; e.g., all RVs are poorly made by unskilled labor, fires happen all the time, they are fire traps, your pets will die, and you have 20 seconds to live. There was good information on fire extinguishers and detectors but way too heavy on the negative causing us to pause and rethink our strategy. After we talked with other RV owners we calmed down a little and now are back on track.

We have split up what needs to be done before the FSBO candidates see the place and are concentrating on that list. We hope to be done with that next week and show the place before July 1st. This date keeps moving out because there is just so much to do. A week may go by and all we get done is normal upkeep; cleaning, mowing, laundry, etc. How did we ever have time to work?

O Canada; as mentioned previously Bob just got back from a week (Saturday to Friday) of fishing in Canada with his buddies Mark and Gerry on Thaddeus, Ord and Moose lakes in Ontario. As with any trip of this distance (approx. 900 miles) there are stories to tell. There was bad traffic in both directions; heading north a bad wreck near the Missouri river that had both sides of I435 backed up for miles. Then there was road construction in Missouri, Iowa, and Minnesota that caused delays in both directions. What is being called the "great yellow trash bag incident of 2009" occurred as we were just about out of Iowa heading into Minnesota. Bob packed some of his stuff; pillow, bedding, rain gear, life vest, etc., into a yellow trash bag and put it in the boat. As Bob was sleeping and Gerry was driving a driver pulled beside him and was waving frantically. Not sure what the problem was Gerry pulls over to the shoulder and hits the warning grooves rattling the entire van rousting Bob from a deep sleep. The first thought was a blown tire but upon further review the yellow trash bag had flown out and probably hit the driver who was waving frantically. Figuring the stuff was behind us we proceeded to the next exit and proceeded south to the next exit, luckily they were only about a couple of miles apart. Long story short is that we found everything except the life vest on the road, it had been run over and the pillow was ruined but everything else was found and in good shape and we headed back on our sojourn north.

Bob was last in Canada in 2001 so he noticed improvements on the road from I35 to International Falls. The road was more 4 lane than he remembered, plus there were clear skies and a full moon such that he was able to see the horizon when driving at 3:00 a.m. on the way to International Falls. Bob usually ends up with that stretch of driving and 2 lane roads with construction and heavy rain and dark, dark, dark was the normal conditions. The border crossings were also much worse than expected, especially on the way back since it was a Friday and most fishing trips to Canada are Saturday to Saturday instead of the Saturday to Friday for this camp. Due to all the delays what normally takes about 18-19 hours took 20.5 hours. Arriving at the camp we noticed what appeared to be a huge mass of mosquitoes and we thought we were in for it. Turns out they were not mosquitoes but a harmless bug that was just annoying due to the swarm of them. The weather was cold enough there may have been only one mosquito bite the entire trip. 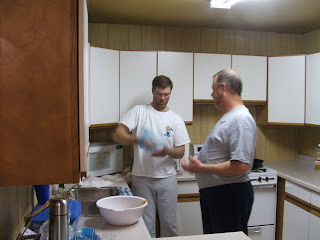 The cabin was a very pleasant surprise, it was probably the best cabin except the privately owned Eschbach cabin the very first year Bob and Mark went to Canada in 1982. 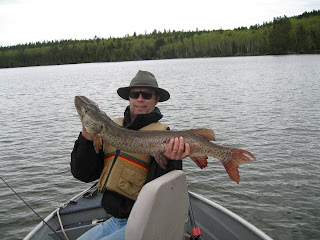 The weather may have been cold but the fishing was pretty good for Walleye, Northern, Smallmouth Bass, and one 36" Muskie caught by Mark. For conservation purposes there are now size limits on the fish and one day a lot of walleyes were caught but every single one of them was either over the limit or too small. Mark caught a very nice 26" walleye and both Bob and Gerry caught walleyes that were over 20". The Northern caught were not spectacular but numerous and fun to catch. The surprise of this trip had to be the number of very nice Smallmouth Bass caught, the most caught on any trip to Canada that we could remember. The biggest was Gerry's 3 plus pounder. 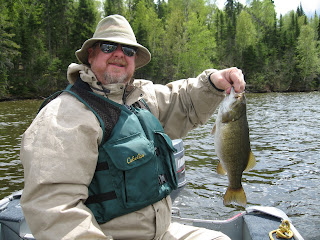 More pictures can be found on http://www.flickr.com/photos/bobandjotravel/sets/

Since we are in a mad dash to get the house ready for the FSBO candidates first and then Realtors I can now guarantee that any travel related posts (Albuquerque, Clearwater Beach, etc.) will be after we move into the 5er.

NOTE: See our photos from places we have visited, including pictures from the Canada fishing trip, at http://www.flickr.com/photos/bobandjotravel/sets/
Posted by Bob and Jo at 7:13 AM 2 comments: