But not yet living the dream : )

We are currently living in our new home in an RV Park just south of the Kansas City area and have been for about 2 weeks now. As the date for the deliveries of the fifth wheel and the truck got closer and closer there was some confusion. At first it looked like we would be able to take the truck and pickup the fifth wheel after all. Then the truck was delayed a week and it looked like we would drive to Michigan to inspect the fifth wheel and then pay for it to be shipped back. The day before we were to head to Michigan we got a phone call that the truck was to be delivered later that day. A quick change of plans resulted us picking up the truck at 6p and heading to Michigan the next morning. Bob had 800 miles to learn how to drive the Ford F-350 and then 800 miles back. 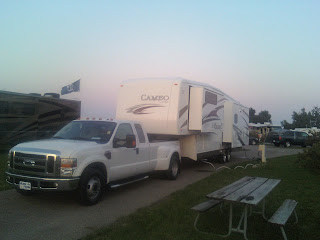 We were able to spend a night at the dealership as part of our inspection and the next night we camped in a state park on Lake Erie. We walked along the shore and saw one of the best sunsets we have ever seen and we thought, yeah, this is living the dream! 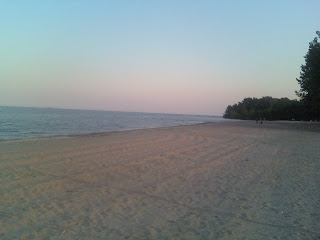 The next day we were getting off at an exit to get gas and as Bob turned right there was a tremendous lack of power as the progress slowed to a crawl. We were barely able to get to the side of the road under an overpass. The dashboard indicator read 'trailer brake wiring fault' so we inspected the power cord but it was OK. We have emergency road service from Good Sam Club so we called them. They put a RV technician on and he directed Bob to check the breakaway switch. Turns out the cable for the breakaway switch had gotten caught on the fifth wheel hitch and became dislodged causing the trailer to think it was disconnected from the truck so the trailer brakes were locked. Reengaging the breakaway switch did its magic and we were back on the road again. 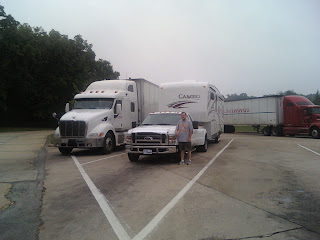 That night is when the fun really began, so to speak. We decided to try a night at Wal-Mart parking lot and use the generator and the fresh water in the onboard tank. We stopped in Marshall IL and confirmed with the Wal-Mart that overnight parking was OK. After buying a few things we turned the generator on and immediately noticed that just a few things were working; the bedroom a/c and the microwave was about all that was working, no TVs were working (turns out one of the breakers on the generator was flipped so that is why only a few things were working). Without TV to watch we decided to read and then it became really interesting, the bedroom a/c started just putting out warm air (turns out the outside air was not hot enough for the a/c to work properly). Since we were worried about the generator we turned it off and opened up the bedroom windows to get the cross flow breezes, turned on the exhaust fan in the bathroom and read with battery powered reading lights lying in the bed. Are we living the dream yet?

We really thought the worst was behind us but boy were we wrong. The next morning we started the generator so we could microwave some breakfast treats when we heard some beeping and noticed the LP gas and Carbon Monoxide detector beeping. Because we were worried about the generator the night before we hastily turned the generator off and opened the door to get a breeze. When we realized it was just the battery low indicator on the detector we then tried to start the generator to charge the batteries. Here's the rub, there was not enough battery to start the generator. Here's the worse rub two of our slides were still out, Jo was worried about this very thing so we put in the living room slide the night before. Bob was trying to decide how to manually start the generator or how to get a wrench and manually retract the slides when Jo had a great idea, to hook up the power cord from the truck to the fifth wheel and see if the batteries on the truck would provide enough juice to retract the two remaining slides. This worked like a charm and in no time we were back on the road again thanks to Jo. We drove all day getting into our new location for awhile at the Peculiar Park Place RV Park in Peculiar MO about 5:00 p.m. and after setting up the fifth wheel we wondered if we were about to start living the dream.

But then reality set in again as we are trying to figure out how to organize and we are busy all the time. We have been unpacking, organizing and then moving stuff from one area to another as we try to figure out how to live in our new home. We were so accustomed to having stuff within our fingertips that now we have to pare down and not everything can be in the bathroom but where do we put the extra stuff; in the cabinets over the recliners, in the cabinets over the couch, in the entertainment center, on the cargo tray, or in the rear basement? We have moved things a couple of times as we adjust. We still have a lot more in storage to go through but only the important stuff will even make the trip, the rest goes to Goodwill in Belton. We have yet to "live the dream" but plan on that as soon as we are organized and are on some beach somewhere.

Our next update will be about learning how to back up this beast, the issues with our satellite antenna, becoming Texans, and other things we are certain that will crop up.

NOTE: See our photos from places we have visited at http://www.flickr.com/photos/bobandjotravel/sets/
Posted by Bob and Jo at 1:55 PM 1 comment: