As promised another entry in our continuing saga of living full-time in an RV with three cats. 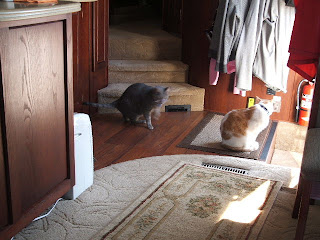 We wish the photo was better but here goes. Believe it or not we have a cat that fetches. Bob's sister taught Sandra, aka 'cutest cat ever' to fetch when we lived in our old sticks and bricks. Being a cat Sandra does not fetch often and only when she wants to but when she does it is quite a treat. Yesterday was one of those days. Jo threw the safety ring from a milk jug and Sandra would run and grab it, put it in her mouth and bring it back to Jo to throw again. It happened so fast it was hard to get a good picture.This happened quite a number of times with a few variations. Some times Sandra would play with it before bringing it back which caused problems a couple of times since she would bat it underneath the couch or refrigerator.

This brings up a couple of pet peeves about cat toys. First, why do they always bat them under the couch or recliner or refrigerator or .... We have probably 2 dozen toys of which usually only one or two, if that, are visible, the rest are under something. Digging out the safety ring to continue playing fetch yesterday allowed Jo to find a lot of the toys.

Our second big gripe about toys is why is it always the cheap ones they like the best. We have balls with bells in them, things that look like jumping jacks squashed, catnip balls and others that we have purchased. But the ones they like the best are the safety rings from milk jugs, or the caps from milk jugs. We have quit buying toys because we always will have milk around for the rings and caps.

We should be receiving a replacement camera soon for the one Bob dropped on our trip to Tortilla Flat and this camera is supposed to have better image stability than our current one so maybe on the next 'Fetch Kitty' event we might have better pictures. 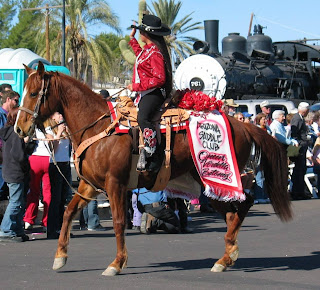 Advertised as western fun we went to the 62nd Annual Gold Rush Days in Wickenburg Arizona on Saturday, February 12th. This event celebrates the town’s origins as a ranching and gold mining center in the days before there was a Phoenix.  Gold Rush Days draws tens of thousands of visitors, and it seemed like they all showed up the same time we did because man it was crowded.

The official opening was on Friday with gunfights followed by the opening ceremony and the opening of the main festival area on Valentine Street in the historic district which had over 200 arts/crafts exhibitors, a family fun carnival, photography exhibit, art show, free stage entertainment, panning for gold and much more.  We got there Saturday for the tail end of the parade, tail end get it! The parade is one of the largest in Arizona, with over 100 entries including 1,000 horses, classic auto’s, floats, marching bands, and youth groups participating.  We walked around the exhibitors for awhile but then decided to beat the crowd at the Western Barbeque put on by the Saddle Club. We had some pretty good beef and slaw and beans. We then walked through all the exhibits until we left so we did not see the Rodeo which is also a part of Gold Rush Days.

We had a great time and can see why American Cowboy Magazine lists this as one of the 'Best of the West' events, but we really want to go back sometime when it is less crowded as this looks a neat historic town to visit. There is an excellent museum, the 'Desert Caballeros Western Museum', along with historic buildings, an old 761 Santa Fe Steam Locomotive, a nearby nature preserve and a nearby shrine, the 'Yarnell Shrine of Saint Joseph' with statues and plaques following the Stations of the Cross. All this plus a couple of good places to eat and you could not ask for more.

One way we get restaurant recommendations is from our friends and Abuelo's was mentioned by more than one as a good place to eat. Even though there is a location in the greater KC area we somehow did not find the time to eat there until we were on the road, funny how that works.

As mentioned previously we recently ate at Abuelo's and loved it. We had to eat at it a few more times before we could recommend it though. We have a rule of three, if we go to a place three times in a row and it is good every time and we want to go back then we feel like we can recommend it. Well we have eaten at Abuelo's many more than three times and really like it. When we mentioned to some friends who had recommended Abuelo's how much we liked it they said they have quit eating there because to them it has gone downhill. Well if what we have eaten is less than before then it must have been really good back in the day. Everything we have gotten there has been good with some standouts like the chile relleno and the spinach quesadilla.

After dining we went to the Greater Phoenix RV Show. The best that can be said about this show is that it is free, free parking and free admission. There were not as many units as we thought there would be but that was fine as we were picky as to which ones we toured. Saw some really nice rigs but none that made us want to trade. We were kind of disappointed because we saw Carriage on the list of vendors that was supposed to be represented but there were none to be found. All in all a very enjoyable day of dining and sightseeing.

One of the best things about living in an RV is that when the urge strikes to do some cleaning a lot can be accomplished. We have a storage area behind our TV in the living room and this was getting disorganized and dusty. A few minutes effort and this area was spic and span and much better organized which allowed stuff from our junk drawer (unlike our old sticks and bricks we have a single small junk drawer) to be placed in plain sight. Feeling invigorated we next tackled the island where a lot of kitchen stuff is stored. The good news is that we use all of the stuff regularly which seemed to be in the right location.

We also did some housekeeping on our blog moving some stuff around to improve the readability and adding an entry to 'Our Favorite Things (Food)' adding TJ's Homestyle in Avondale Arizona for the best oatmeal.

We are always on the lookout for great food at a good price and we think we have found one that we would like to share. The Greek Gyro Express in Avondale Arizona on Dysart near Sam's Club. This is fast food at its finest with large portions and fast service. They have good daily specials, a gyro and drink or a gyro salad, both with lots of meat and the gyros are excellent. We have tried other menu items like the Greek spaghetti and it was good but you have to be mindful it is 'Greek' spaghetti and not your normal variety. The meat sauce has a cinnamon accent which we found interesting but might not appeal to everyone. The best thing we can say is that we would get it again.

If this was all there was with this place it still would be great but they kick it up a notch by offering two homemade soups as a free appetizer while you wait or for takeout. The offerings usually include lentil bean and another, this time it was lemon chicken and rice and both were very good. With the large portions and the soup you will not go away hungry so if you are in the area take a chance on the Greek Gyro Express. We know we will as there is a feta burger with our name on it.

We finally got to Quartzsite 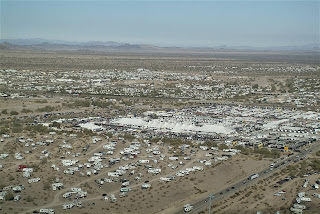 After reading about Quartzsite ever since we started researching about the RV lifestyle and entertaining the possibility of full-timing we finally visited, although it was only a day trip for the RV Show. Quartzsite has been called "Woodstock for RV'ers" and "The Greatest Show on Dirt" and is about a two hour drive one way from where we are currently parked. We went with our friends Bob and Wilma and their company and the rugged scenery mostly on I-10 made the trip seem shorter than two hours.

You can read about it but nothing prepares you for your first look at the area. There are RVs everywhere, vehicles everywhere, people everywhere. According to the Arizona Highway Department, as many as 750,000 to 1,000,000 people, mostly in RV’s, converge on this sleepy little desert town every year mostly between November and March. There is an ongoing flea market along with a gem show, an auto show, and the one we were going to, the Sports, Vacation and RV Show during different weeks. The RV show is billed as "The Largest Gathering of RVers in the World". Like Memorial Stadium in Lincoln Nebraska that becomes the third largest city in Nebraska on game days the RV Show becomes the third largest city in population in Arizona during the RV show at over 150,000.
Similar to Branson Missouri which has a small population and then swells with visitors Quartzsite has just over 3000 permanent residents but unlike Branson which has a good infrastructure Quartzsite has only two off ramps on I-10 which can make the traffic terrible. But it was worth it for us because of the RV Show. 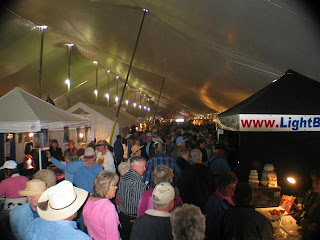 We have been full-timing since September 2009 and have yet to attend a big rally so this was our first exposure to the vendors that are typically at rallies so we enjoyed ourselves. We spent some money on some items and saw many others that we were tempted to buy. Directly outside of the RV Show tent were other RV related vendors and food vendors. We ate at a Texas BBQ place and got brisket, pulled pork, beans and fries. Not the greatest but pretty good for the setting. After we toured all the RV related booths we walked to the flea market area, and walked, and walked. Man there are a lot of vendors here in the desert. We probably only hit about 1/2 of all the vendors possible but by then it was time to go since we had a two hour drive ahead of us. We went on a brief driving tour of Quartzsite which took us by a McDonalds for a necessity break and some hot fudge sundaes to fortify us for the drive.

To be honest the day tired us out a little and it took us a couple of days but now we are ready to go back again probably next year.