We recently ate at our first Five Guys burger place and we have to say it reminded us a lot of the In-N-Out burger places that we have eaten at. In-N-Out started out in a single location in Baldwin Park CA in the 40's and instantly became a hit. The owners were reluctant to expand because they wanted to ensure a quality product. The first 200 locations were all within a days drive of the headquarters. As they get close to 250 locations that restriction has eased a little and locations are currently planned in Texas.

Five Guys started out 40 years later in Washington DC and has a more aggressive expansion plan and is already at over 600 locations. To us diehard In-N-Out fans our first impression was that Five Guys copied a lot from In-N-Out. Both offer a very limited menu with only fresh hamburger that is never frozen. Both offer fresh cut french fries. While you could see the potato station at In-N-Out the sacks for fresh potatoes were evident at Five Guys. Five Guys does offer free toppings and that includes all the toppings they offer from the usual suspects to jalapenos and A-1 sauce. Five Guys also offers hot dogs.

In-N-Out offers both inside and outside seating while Five Guys only offered inside seating at the location we ate at. We have to give the nod to In-N-Out as far as seating goes. The entire inside of Five Guys was sound reflecting material which made for a very noisy dining experience. When there were more people behind the counter than customers it was still incredibly noisy with music that really was not that loud. As the place filled the noise became unbearable and we finished our meal with another couple and then went outside so we could finish our conversation.

OK enough already for the minutia how was the burger and fries? Five Guys offers a very good burger but in our opinion In-N-Out is better. Bob felt strongly that In-N-Out was better and Jo was on the fence (BTW Jo feels that the burgers at Culvers may be even better). Not sure if it is the bun, which is better at In-N-Out, or the meat or the cheese but In-N-Out was still better. Five Guys has a lot of posters stating best burger in a lot of locations but if you pay close attention most if not all these places do not have an In-N-Out to compete with. As far as the fries goes we are not sure which one is better than the other. For those interested the best fries we have had is at Sneads BBQ in Belton MO which is a suburb of Kansas City.

We are talking that since we will be wintering in the Phoenix area and both franchises have locations there that we will do a lunch one place and supper the same day so we can really give a good evaluation. This is purely for scientific reasons only :-)

August is Bob's birthday month and no we won't tell you how old he is! Through the years we have signed up for a lot of frequent quest programs or e-clubs at various restaurants. As Bob's birthday approached the emails started flowing in with offers of free food. The nice thing about these programs is that by joining them Bob got a free entree or money off just for signing up..

So far we have eaten at McCormick and Schmicks which gives you $30 on your birthday. Of all the offers this is the only one you have to pay to join but the fee is immediately refunded in a dining certificate of the same value. Bob joined this program while he was still working and traveling a lot on business. The program used to be a lot better but the bad economy has forced them to stop giving the spouse a free birthday gift.

All the other e-clubs are free to join and the offers received include a breakfast at First Watch, a stir fry meal at BD's, a dessert at Fridays, $10 off a $20 check at Mimi's, coffee or tea at Borders, and a free buffet at Ryan's.

We recommend signing up for the frequent quest programs or e-clubs at these restaurants and we are sure there are more. It is a great way to save a little money which is a good thing and an excuse to eat at some of our favorite places to eat which is a great thing.

Catching up on some of our visits from earlier this year as we trekked from Arizona to Missouri. We hope to have all of the stops covered before we leave Missouri, whenever that will be. We then hope to be more current in our posting. We could probably have a separate post on how much time we spend on blogs, both on working on ours but reading the blogs of fellow RV'ers. There are so many blogs that offer unique perspectives on traveling, living in an RV, and dining. We have just added some of the blogs we are reading to the main page of our blog if you are interested. 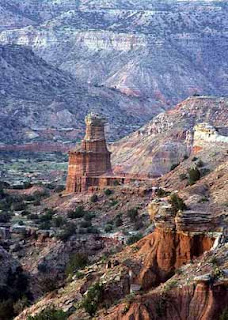 Both of us have traveled to Amarillo on business before and we were both amazed at how different it was. And by different we mean better. There are more restaurants that you might recognize, some good local ones and this time we actually had time to do some sightseeing. We were able to get our Rudy's Country Store and BBQ fix for some of the best leanest brisket we have ever had. Along with that we sampled the bread pudding at Famous Daves which is on our 'best of' food list. We also ate at a Taco Bueno for the first time in 5 months.

We ate at Abuelo's for the very first time even though there is a location in the northern part of the Kansas City metro area and we wanted to eat there for awhile. What is it about traveling that makes it easier to eat at places that also happen to be in your area? We both got the chile relleno and definitely want to eat here again at maybe one of their many locations across the country including the Phoenix area where we plan to spend this winter.


For sightseeing we visited Palo Duro Canyon State Park which is located in the Texas Panhandle near Amarillo. The drive is about 25 miles and it is what you would expect, flat nothingness as far as the eye could see. We we wondering if we were on a snipe hunt because we never saw anything that would indicate that a canyon was nearby but then WHAM we were right on top of it. The Canyon is 120 miles long, as much as 20 miles wide, and has a maximum depth of more than 800 feet. Its elevation at the rim is 3,500 feet above sea level and is the second largest canyon in the United States. We thought it was neat that you could drive through the canyon all the way to the bottom and back up. Early Spanish Explorers dubbed the canyon "Palo Duro" which is Spanish for "hard wood" in reference to the abundant mesquite and juniper trees. 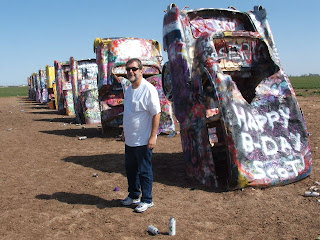 Our last sightseeing adventure we kept seeing from the road as we went from our RV Park (more on that later) to town. There were always cars parked on the frontage road and stubby things sticking out of the ground in the nearby field. Turns out it was the 'Cadillac Ranch', a collection of assembled used Cadillacs representing the "Golden Age" of American Automobiles (1949 through 1963). The ten graffiti-covered cars are half-buried, nose-down, facing west "at the same angle as the Cheops' pyramids." There is no charge and the use of spray paint is not discouraged.
While in Amarillo we stayed at the Oasis RV Resort and we really liked the park. It was everything that we like; full hookups, paved roads, concrete pads, clean and well maintained. The price was very nice also, pay for 2 nights get the third night free. At the clubhouse food was catered in for breakfast and for supper at a reasonable price. The only thing we did not like about the park, and it is something they have no control over, and that is the wind. If you remember the recent post on our new bird feeder it was real windy and that is one thing that has not changed since we have been coming to this area.

In closing we would like to say to all of our old coworkers who happen to read this blog do not hesitate to go to Amarillo for a business trip or a vacation, give it a chance.

Photos from this brief visit have been added to flickr.com. 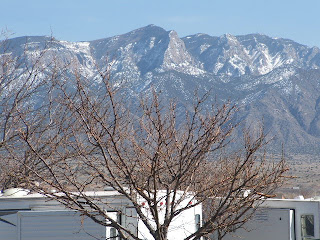 We have blogged about our love for New Mexico and specifically the Albuquerque area before, http://bobandjotravelblog.blogspot.com/2009/12/albuquerque.html, so this will be a brief entry. For more details you can refer to the earlier post.

This was a brief stopover. We camped at the Stagecoach RV Park which has an excellent view of the Sandia Mountains and was the recommendation of our friends Ed & Diane Heath who incidentally were in town on a business trip so we were able to meet up with them at one of my old time favorites in the area, Sadies. We say old time favorite because when it was in the bowling alley years and years ago it was our favorite in the area. It still is good but not our favorite.

Our favorite now would have to be La Salita where Bob met an old friend TC Hobson for lunch one day and we went back for lunch another day. The chile rellenos there are some of the best we have ever had. A close second on the favorite list is the Range Cafe in nearby Bernalillo. Bob had a green chile cheeseburger with green chile mac-n-cheese which were excellent. Another favorite there is the Range Chicken. You cannot go wrong with the food in Albuquerque that is for sure.

A couple of photos from this brief visit have been added to flickr.com.

http://www.flickr.com/photos/bobandjotravel/sets/
Posted by Bob and Jo at 11:43 AM 1 comment: