We 'should' be getting our truck back next week. But that is not the only good news on the truck. Since there was more damage than originally estimated and since the bed of the truck was also dinged up (we bet you are wondering where the good news is) all the stuff had to come out. That included the auxiliary fuel tank and the fifth wheel hitch and a CO2 tank we had added for filling up tires. With all that out it was now a perfect time to have a LineX lining added. We had originally wanted to do this before we added all the stuff but we picked up the truck at 7p the night before we drove to Michigan to pickup the Cameo so we did not have the time.

We will let you know when we get the truck back,

Learned something new today (and a great product for RVs)

Today proves the old adage that you are never too old to learn something new. We had a big housecleaning day today and we washed the insides of the windows since we are getting the 5er washed and waxed on Monday. We have always had dirty windows screens from our days of living in the old sticks and bricks but it is much worse in the RV since a lot of the time you are parked on gravel and the wind kicks up and you get the picture. We have tried attachments on the vacuum and other techniques that just have not cut it. 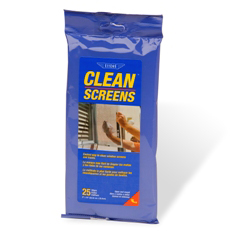 Just recently we were in Ace Hardware and we noticed a packet of Clean Screen wipes so we figured what the heck. Well we tried them out and they work great. Advertisement says specially formulated to attract dust and it sure does. Our screens have not looked this good since we picked up the Cameo over 2 years ago.

The wipes are not what we learned today; what we learned is that the screens on our RV pop out for easy cleaning. Our previous inspections of the screens showed what we thought were mounting screws but they turned out to be assembly screws for the screen. Bob learned this as he was trying to clean the outside of the screen from the outside and popped the screen inward. Our cat Sandra who always keeps track of what we are doing was right there and was real interested in the opening created so Jo ran inside. Once we learned the screens could be easily removed from the inside it was a 2 person job to remove and clean the screen and watch to make sure a cat did not try to escape.

As you can probably tell by the lack of blog updates we are settled in at our winter location and with our sightseeing reduced so will our blogging, that is until we learn something new.

We ran out of words

Utah is our favorite state so far while full-timing. The beauty was so overwhelming we ran out of words to describe what we were seeing. We kept using the same words over and over again. 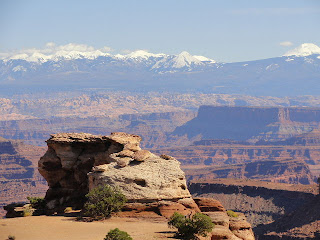 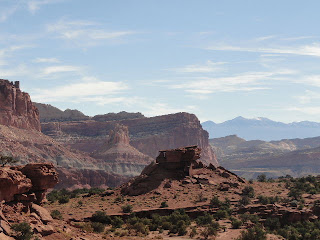 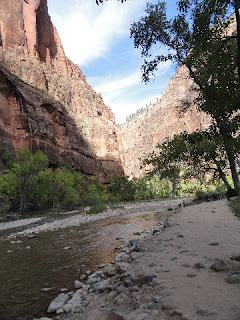 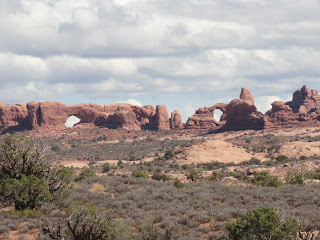 Zion was our favorite National Park, although we did not get a chance to see Bryce Canyon National Park, oh well, must save something for one of our next visits to Utah. We would not hesitate to visit all the National Parks again as they were so amazing and left you wanting to see more. Plus the light at different times of the day impacted the scenery. There were two parts of Zion and we only got to see the lower part so we will see Kolob Canyon next time. The two areas of Zion are a ways from each other that each area has their own visitors center.

We would not hesitate to visit Moab and Torrey again but we might find a different location that is more convenient to visit Bryce Canyon the next time.

It is going to take longer than originally estimated to complete our truck repair. In fact it is more than double the cost and time. The adjuster felt that the walls could be pulled up and save on buying two new side wall pieces, that did not turn out to be the case. The tailgate damage was also worse than estimated and will require a new one.

So we will be skimming along on the top of the pavement like a two person luge in our rental car until sometime in December. We still occasionally think the truck has been stolen when we cannot find it in the parking lot and when we see the car parked in front of the fifth wheel we sometimes wonder who is visiting. We are sure that once we are totally used to the rental car then the truck will be finished.


Thanks to all those who have served we are the land of the free because of the brave!

Back into our movie routine

Now that we are back in our winter spot we hopefully are settling back into our movie routine. As we blogged about last winter we try to go to a movie at least once a week when we are at a location for more than a few days. We have developed a pretty good routine as the Gateway Pavilions where we see the movies has a loyalty t-shirt that you buy and then get a free medium popcorn for all of 2011 and also a loyalty cup where we can pop get refills for $1. Just outside the theater is a Yogurtland where you can get 3 oz free with your movie stub, with about 20 varieties and free sample cups it is an adventure. So we have a weekly routine of a movie with popcorn and a pop and then top it off with frozen yogurt.

We just saw "Tower Heist" and liked it so we would give it a 3. Our total rating system is based a lot on our Netflix watching:

1 - sooooooo bad could not even finish
2 - sooooooo bad but could finish
3 - Liked it
4 - Really liked it
5 - Epic, Must See; worth seeing again in the theatre, worth buying the movie and watching again

We would add another rating of 6 to the Netflix rating system and that would be an all time favorites, which we posted in a previous blog entry. One all time favorite we realized we missed thanks to Bob's sister is "The Notebook" so we have repeated the list here adding it.

So here in no particular order is our list of all time favorite movies, although we are sure we may have missed a few:

We previously blogged on what a weird feeling it was to spend a few nights in a hotel while our fifth wheel was being worked on. We are now experiencing another weird feeling since for the first time in 2 years and 2 months we are driving a car instead of our Ford F-350.

If you recall we dropped the fifth wheel onto the pickup a few months ago. 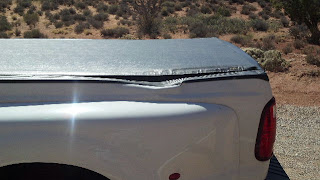 Except for the sick feeling that we got when we did it and the damage to the truck bed we got off pretty easy. The damage to the fifth wheel was minor, a couple busted screws and some caulking was all that was needed. Our dealer must have felt sorry for us because they did not charge us for the repairs.

We were still able to drive the truck so we continued on our journey until we were going to be at a place long enough to get the truck repaired since it is a 2-3 week job. So yesterday we dropped off the truck and Enterprise Rent-a-Car picked us up. After riding so high in the truck we feel like we are in a go cart we are so low to the ground. It feels like we are falling when we get into our seats and we have to pull ourselves up just to get out. All kidding aside there is a safety issue with the car. We are so used to the gigantic mirrors on the truck and the visibility they provide that the tiny mirrors and visibility with the car will take some getting used to.

Bob has been under the weather the last few days so there are a few blog entries to catch up on so stay tuned. Bob will be blogging while Jo is driving around Goodyear in the rental car since she does not do much driving otherwise.

We arrived in our spot for the winter, Destiny RV Resort in Goodyear Arizona on Tuesday November 1st. 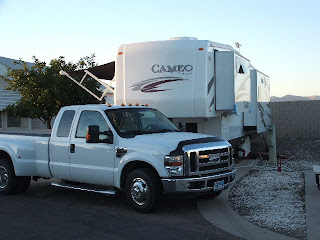 It felt like home as we were pulling into the park. The sunshine was nice when we got here but the temperature was in the mid 80's with a forecast of 5 more days 80 or above which sure does not feel like winter to us. We left from near Winslow and if you recall a previous post it has the nickname 'Windsblow' and today was no exception. The forecast called for 74 mile an hour wind gusts but that was later in the day. We got up earlier than normal and got out of there  pretty fast. There is always wind around 'Windsblow' and Flagstaff but we handled it OK and we were way past both these locations before the wind got too strong.

We plan to be here until at least March 1st enjoying the good weather; once it cools down to our new normal winter temperature of 70 degrees.

We are a little behind on our blogging so now we can catch up now that we will be in one spot for awhile.