OLD AND NEW (BACK IN GOODYEAR)

After over a week at Camp La Mesa we finally left for Goodyear last Thursday. Here is our old Cameo and new Lifestyle parked next to each other at La Mesa RV. We had water and electric at both sites. 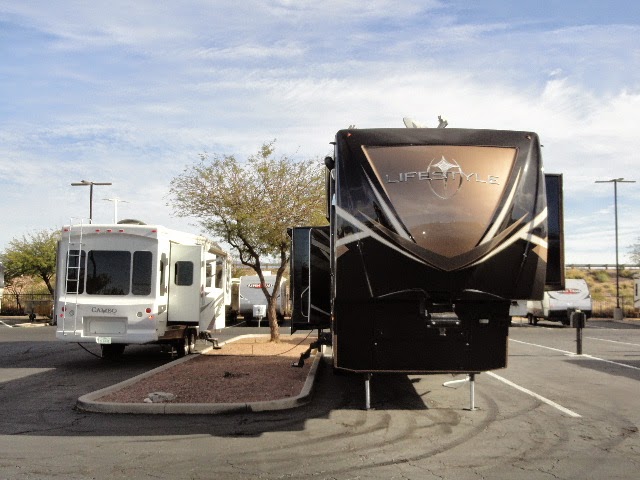 It was nice to have the Cameo so we could move the cats there and spend the day while they worked on the Lifestyle. They picked up the Lifestyle in the morning and brought it back each evening Monday, Tuesday and Wednesday.

You are not going to believe this but another gremlin reared its head just as we were about to leave. Any guesses? That's right the trailer brake gremlin. We got ready to leave and tested the trailer brakes and there weren't any. Turns out this gremlin was easy to find, a cut electrical wire to the brakes that was fixed and we got on our way.

Even though longer and wider and heavier the Lifestyle towed nice but we still got bugs on the front cap :-)

We have been busy with getting our new place organized and running errands after spending more than a week at Camp La Mesa.

Believe it or not we are still in Tucson at the RV dealership. What has taken the most time has been the moving of our generator from the Cameo to the Lifestyle. We got here last Wednesday before noon and moved the cats, refrigerator and just enough to spend the night in the new Lifestyle. We did our walkthrough after they took the Cameo to take the generator out. We found a few small problems during our walkthrough. Took them the rest of the day to get the generator out. What we did not expect was that it took almost two days to put it in the Lifestyle. That meant we could do no moving and we had to spend Thursday night back in the Cameo. We got the Lifestyle back late Friday afternoon with some work still to be done. They don't work on the weekend plus we had no time to move with one or the other RV gone so we stayed here. They took the Lifestyle to the paint shop yesterday for some touchup and then worked on the other items. We will probably be here again today as they finish up some things. We "HOPE" to be heading back to Goodyear tomorrow. In the mean time some observations:

The stay in our old Cameo was like camping, we had to watch live TV for heaven's sake.

It was nice having the Cameo to put the cats in and we could relax in while they took the Lifestyle.

But it seemed like all we played was the waiting game, got all done in the Cameo that we could and then waited and waited.

Jo thinks she will need a nursing home after this. We both say this is our last move; we will be carried out of the Lifestyle feet first.

Living in it while at the dealership does have the benefit of really testing out all the features, we just found out this morning that the bedroom heat pump doesn't work so we added it to the list.

Sorry no pictures yet, we just found the camera yesterday.

We drove to Tucson yesterday for our walkthrough spending our first night in our new Lifestyle. Tonight we are back in the Cameo. Don't worry we like the Lifestyle but we have a lot to blog about later. For now some other observations.

Thought it would be less cluttered but you should see the Cameo tonight.

We feel a little like pingpong balls, we moved enough from the Cameo to spend the night in the Lifestyle yesterday so our generator could be taken out.

Today the generator was to be installed in the Lifestyle but it didn't get finished so we had to scramble to be able to sleep in the Cameo amongst the clutter.

Our cats were a little tense yesterday but finally settled down in time only to be moved back to the Cameo today while we were packing, hence the clutter.

The Lifestyle should be done tomorrow morning so we have another night at Camp La Mesa.

It is an annual event here in the Valley of the Sun, an Arizona Republic article on the snowbirds. Some of it is thanks towards the visitors for all the money we bring but some of it is snarky about driving, crowds, etc. There even is the 'complaint' that we always seem to have a smile on our face. We thought we would update and publish our "Snowbird Code of Conduct" in response to this article. 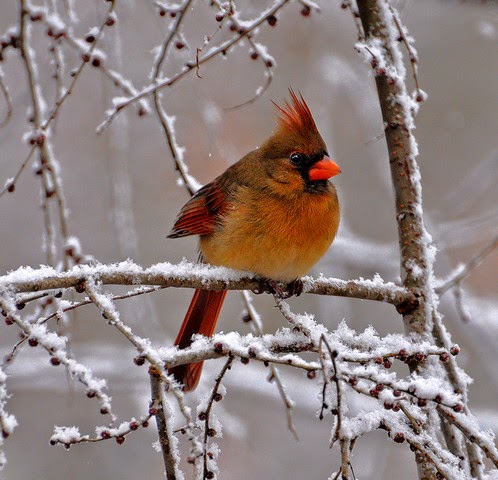 During our stay in the Valley of the Sun we will try to only:


And finally, we always have a smile on our face; it is easy in this lifestyle, so what if it is one of their complaints.

We realize that if you are still working and driving in rush hour traffic, waiting in line to eat, suffering long lines at Wal-Mart that the locals need something to complain about. We know with our 'Snowbird Code of Conduct' they are not complaining about us.

We are heading to Tucson on Wednesday to pick up our new rig. We will take a couple of days there moving from one house to the other and then be back in Goodyear for the remainder of our stay here.

WE ARE GETTING A NEW RIG, PART 3 (DAY TRIP TO SEE NEW RIG)

Now that the Super Bowl crowd has left our weather has turned from rainy to bright and sunny with above average temperatures. Weather was still better than either Seattle or Boston that is for sure but still not up to par for the winter here.

As we mentioned we got the call that our new home is at the dealership in Tucson. Since this is the third possible fifth wheel in our journey to a new home we decided to take a day trip to check it out and make sure that it had all the options we thought it was going to.

We didn't realize but this was the first time we saw all of our decor options; wood, leather, carpet, countertops, wallpaper, etc. in the same rig. We are so glad that we took this day to do this. We fell in love again with our new home. It has been a long and somewhat frustrating journey but we are back to feeling good about it. Here are some pictures taken with Jo's phone. 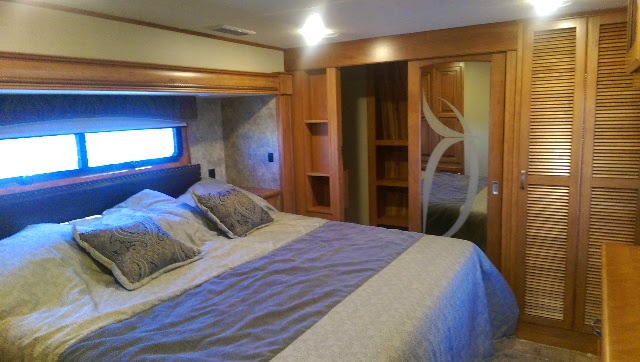 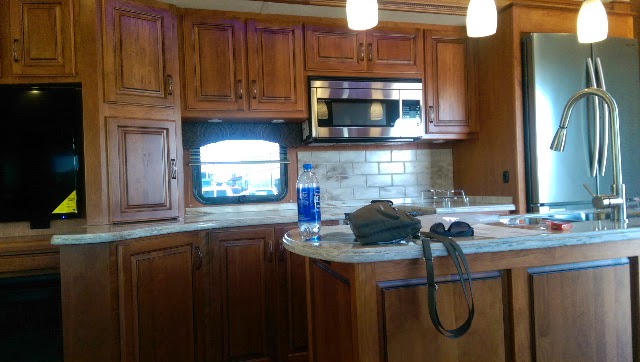 The dealership is working on getting the satellite dish and the stacked washer and dryer installed. We take our Cameo down there on Wednesday February 11th and do our walkthrough and begin moving in. We figure it will take us a couple of days and then we will be back in Goodyear.

WE GOT THE CALL AND MOVIE UPDATE (INTO THE WOODS)

We got the call we have been waiting for, our new home arrived in Tucson late last week. They will be doing their walkthrough and adding a satellite dish and a stacked washer dryer then we will be heading to do our walkthrough and the big move. This is great news and saves Bob a call to the factory on Monday.

We see a lot of movies while here for the winter and we recently saw "Into the Woods". 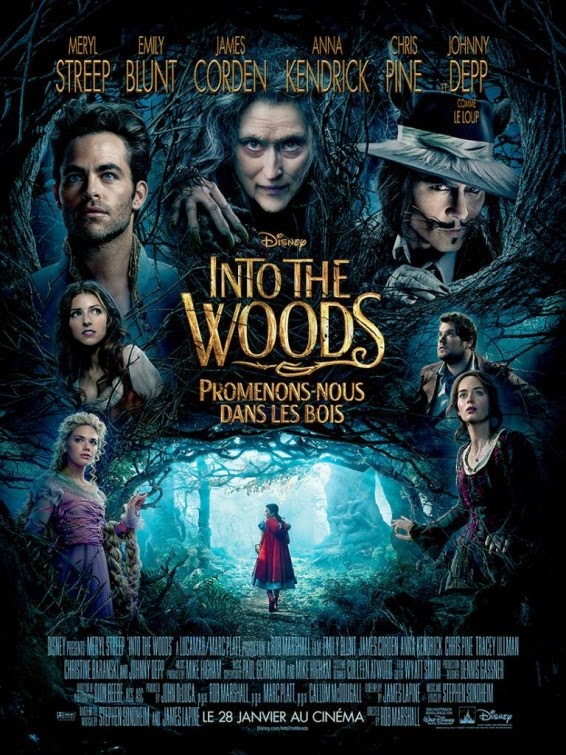 First of all for those who are thinking about seeing it here is one key thing to know, it is a musical! The first few trailers we saw did not have any singing at all. We had some friends attend it before we did and they mentioned the music was wonderful, so we were fully prepared. The music and songs by Steven Sondheim were very good.

"Into the Woods" does a twist on the beloved Brothers Grimm fairy tales like the television show "Once Upon a Time" by combining the characters from the classic tales of Cinderella, Little Red Riding Hood, Jack and the Beanstalk, and Rapunzel into a single original story. The combining factors are a baker and his wife, their wish to begin a family and their interaction with a witch, played by Meryl Streep, who has put a curse on them.

This movie contains one of the best lines we think we have heard as uttered by Christopher Pine playing Cinderella's prince who says, "I was taught to be charming, not sincere". Sounds like our politicians doesn't it?

If you like fantasy, fairy tales and music you will really like this movie. If you don't, stay home.