We know that we have been saying that we were planning to go to the Temple Square in SLC for the last few days but we finally went yesterday. We got up, had breakfast and caught the free shuttle. We walked around the area, here are a couple of photos. 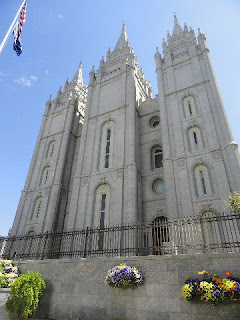 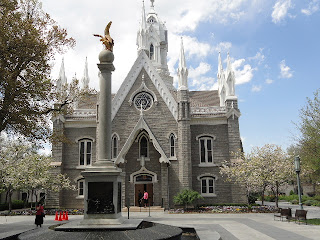 The flowers were in bloom and amazing. Here are a couple of photos. 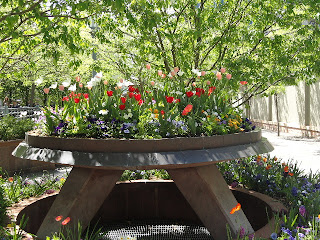 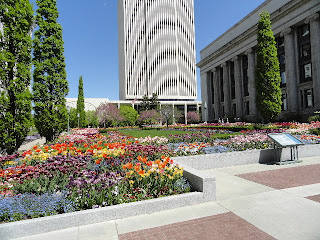 We had lunch at the Lion House Pantry which served up food cafeteria style but it was still pretty good. We both got the lime cilantro chicken with a corn based pico de gallo on top and it was flavorful without being spicy, which we wish more places could accomplish. The mashed potatoes were good as were the dinner rolls, but the steamed mixed veggies and steamed green beans were average. The best part was the piece of cherry pie that we split, has to rank among the best we have ever had.

After lunch we walked around some more and then went to the Family History Library. 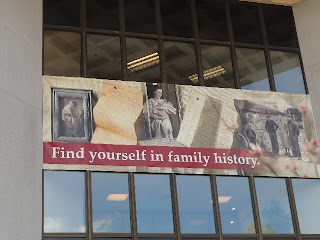 This place is amazing; the records that they have most of which are available to you from computer screens provided by them. The paid genealogy sites are available free while using their computers. There is so much info here that we basically barely scratched the surface. We considered this just a reconnoitering trip for both the Family History Library and the Temple Square since every two years we will be in Denver for Bob's medical tests and heading from there to Arizona via Utah. We thought about staying an extra day in SLC but Thursday looks like a rainy day from SLC all the way to Idaho Falls so we will just have a lot to do on our next visit.

Photos from this visit have been uploaded to Flickr.com in the Salt Lake City set.