CATCHING UP - ANOTHER VISIT TO THE A. E. SEAMAN MINERAL MUSEUM

Continuing our review of the A. E. Seaman Mineral Museum - A Gem of a Museum, on the campus of Michigan Technological University in Houghton Michigan. It has been real rainy and foggy the past few days and more forecast in the future. 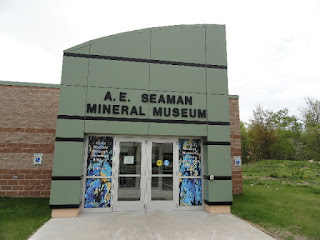 It was nice to see things we have seen before but in a different setting. Here is a barite rose like we saw utilized in the Grotto of the Redemption in West Bend Iowa that we have blogged about before here. 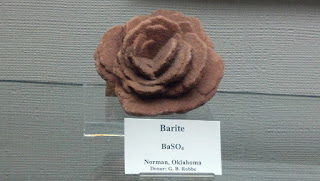 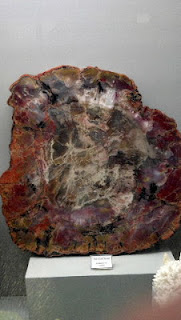 In addition to that which we have seen before but elsewhere we also saw some new to us items. The section on fossils was neat. 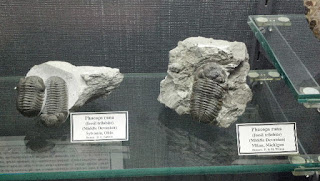 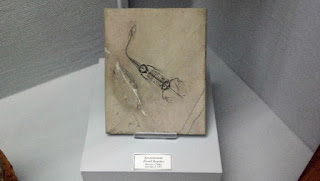 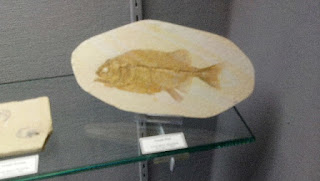 They also had a section on Petoskey Stones which is actually a stone and a fossil. 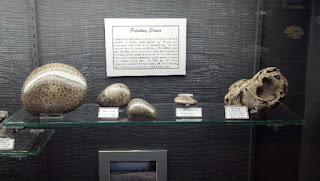 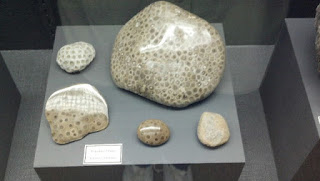 The Petoskey Stone is a coral that lived 350 million years ago during the Devonian age when the northern part of Michigan was covered with a sea of warm water. The scientific name is Hexagonaria percarinata (Hexagonaria meaning having six sides).
The soft living tissue of the corallite was called polyp. At the center of the polyp was the food intake opening or mouth. This dark spot, or the eye of the corallite, has been filled with silt or mud that petrified after falling into the openings. Surrounding the opening were tentacles that were used for gathering food and drawing the food into the mouth. This living corallite thrived on plankton which lived in the warm sea. Calcite, silica and other minerals have replaced the original elements in each cell. Each chamber or corallite at one time was a living marine animal that grew in colonies. The Petoskey stone is utilized in jewelry and floor tile and many other uses.

The display of crystals was fascinating. The generally held belief is that crystals take a long time to form. Here are crystals that formed in just a few years when a mine was flooded and then drained. After 15 years these crystals had formed. 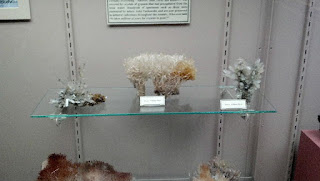 Chuck and Anneke from goldenshoervtrip wondered how minerals were named. Some are named after the region they were found and some were named after a person, like seamanite, named after its discoverer A. E. Seaman, which this museum is named in honor of.

Seamanite is a rare manganese boron phosphate mineral. The yellow to pink mineral occurs as small, needle-shaped crystals. It was first discovered in 1917 from a mine in Iron County, Michigan.

Finally, we really liked the variety of halite, or rock salt, or NaCl, found around the world. 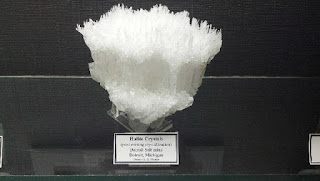 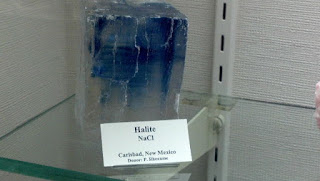 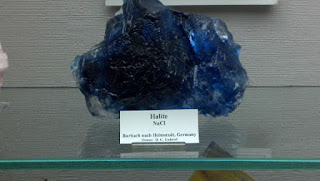 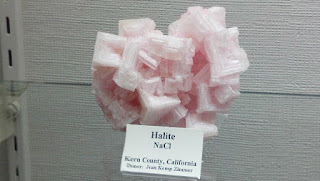 Well this concludes our tour of the A. E Seaman Mineral Museum. It sure increased our knowledge and appreciation of all things mineral.