Resuts of our great Pasty Tour

We left the UP on Friday and drove to Hartland on the Lower Peninsula of Michigan and with that we leave the land of pasties. Ever since we arrived on Lake Superior in June we have been on a great pasty (pronounced pass-tee) tour. A pasty is a pastry crust filled with meat, potatoes, carrots and rutabaga folded into a hand held configuration and baked. Traditionally eaten with no topping or with ketchup in the UP a lot of tourists requested gravy so most places offer a gravy option but we found no topping or ketchup preferable to gravy.

Here is a pasty cut in two just out of the oven. 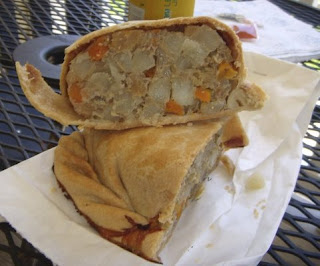 Head and shoulders above all other that we tried is Muldoons in Munising. 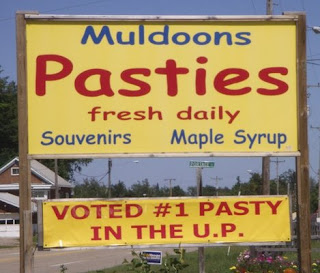 We always tried to eat at a place that just won a competition or recommended to us. Most of the places won area competitions but Muldoons won a UP-wide competition voted best pasty on the UP.  The crust was flaky and not chewy, the meat tender, the potatoes firm, all that you can ask for in a pasty. They serve beef, chicken and veggie (Jo's favorite) pasties in their regular category but their dessert category is what really sets Muldoons apart with blueberry or cherry filling that we sampled. They also offer apple and pumpkin and maybe others. The dessert offering changes daily so we are unsure of the total menu..

The next major grouping are a lot of places that have very good pasties led by Suomi of Houghton, Dobbers in Escanaba which had the best veggie pasty, and Connie's Kitchen of Calumet. Lawry's in Ishpeming, the Gourmet Garage in Bayfield WI and the Taste of the UP in St. Ignace were also very good. Without the experience of Muldoons any of these could easily have been our best.

As mentioned previously our very first pasty was a frozen one bought at a Wal-Mart that was recommended to us in Wisconsin. For a mass produced store bought pasty it was darn good and told us that we had to continue our pasty tour.

We only found one pasty that we would not recommend, or to put it bluntly, avoid at all costs, and that is Sherri's in Ishpeming. Everything you have heard that is wrong about pasties was evidenced in our sampling; the dough was thick and very chewy and not flaky, the potatoes were mush, and the meat was tough. We had great meals at Sherrys from a very good fried perch at their Friday Fish Fry to a couple of very good breakfasts which led us to try their Wednesday pasty special. The lesson learned from this debacle is that it probably best to buy from pasty-only shops.

Our ranking of every pasty that we have had is as follows with their ranking:

GOOD
Wal-Mart frozen (made by a gal in Florence WI)

If you are ever in the UP do not hesitate to do your own pasty tour because they are available everywhere.