We are now in St. Ignace Michigan but boy it was not an easy day yesterday. It was a longer trip of 120 miles which with the small towns and some road construction took about 2 and 1/2 hours. This was not the frustrating part.

The adventure began when we tried to back into the site with a view of Lake Michigan. Bob wanted to stay the last couple weeks on the Upper Peninsula side of Mackinac Bridge so he called Lakeshore Park Campground first with his usual list; 50 amps, satellite dish on roof, etc. We were told the lake view sites were full but that she would try and work us in for maybe a week so we got a pull thru where we were assured the dish on the roof would work. Well a couple of hours later she called back and was able to get us 2 weeks with a lake view. 50 amps was raised as a question but dish on the roof slipped by.

Anyway when we pulled in we were told that no one has mentioned problems with satellite reception at that site and the only discount they offered was FMCA. There was also a FMCA rally going on and those were clues as to what was coming next. This park is setup for motorhomes primarily especially the lake view sites. What this means to the novice is that the hookups are opposite of what we have on our fifth wheel since our lake view is from the rear of the fifth wheel and a motorhome lake view is from the front windows. All hookups are on the driver side. It was a nice wide site which caused some communication problems at first. Let's begin this part of the story by stating that Jo was right, she was directing towards the pedestal with our site number on it. Bob was certain she meant the 'other right' when she said right and was backing towards the normal hookup area so at first we ended up at a strange angle. Bob knew he was in trouble when Jo said the 'other right' a couple of times. In these types of sites we get our sewer and water from our normal side but power from the other.

Wait, there is even more in our adventure.Once we were both on the same page regarding hookup locations and positioning ourselves so that we might get satellite reception. Bob checked other dishes in the park for their orientation and a compass. We needed to be at the very back of the site but then our 50 amp power cable would not reach. We also had to dodge a telephone cable that was about 13'6" above ground or just barely above the fifth wheel. We could not be near that when the dish got into position. So we went as far back as we could to raise the antenna and see if we could get reception. If needed we could pull forward with the dish up and move closer to the telephone cable. We used our 50 amp to 30 amp adapter to get power but there was no reception. So we tried to pull forward just a little and hopefully get a better angle. One good thing that came out of this is that Jo drove, actually she just pulled forward while Bob watched the dish and telephone cable, but she did some towing. She figured that would be the least harmful if something went wrong.

Unfortunately pulling forward did not get us better satellite reception so we just gave up on that and finished setting up. Pulling forward did allow us, however, to use the 50 amp power cord. After getting everything setup, what usually takes less than an hour was now three hours, we had a very late lunch and took a break. Another fun fact about this place, Jo tested the water as she always and it tested at 523 on our meter which is above the safe drinking limit of 500 so we will be getting bottled water for sure. It will be good practice for Canada next year.

After the break Bob decided to try and setup the tripod with dish for the first time ever when we needed it for reception. He looked for the signal meter but it was not where he thought it would be or the two or three other places that it could be. Bob was not too worried since a DirecTV guy told him it was better to use the signal meters on the receiver anyway. We carry the dish and tripod in the truck bed so Bob has wrapped them in trash bags in case it rained on travel days. So the time it takes for a seasoned tripod setter to be finished Bob had just got them out of their trash bag cocoons and did we mention that this was the FIRST time Bob had setup the tripod under a pressure situation. He had set it up and put on the now missing meter but never connected to a TV before.

After getting the tripod and dish out it was time to setup the tripod and get it level. The ground up here is about 3 inches of sandy dirt on top of a limestone bed as hard as concrete, so the long stakes and the auger anchors would not work. A milk jug full of water and a bungee cord is all that he could find to stabilize it. With the tripod level Bob then went to attach the lnb arm to the dish. It was taken apart so it would fit into the box in the truck bed and of course the four bolts needed for securing the arm to the dish were missing. Even though we have only 359 sq. ft. we still have that dreaded place where we put things so we know we can find it again. Right now that place has those bolts and the signal meter and probably a few other things.

No frustrating day would be complete without a trip to the hardware store so Bob headed off to True Value. He took the lnb arm into the store so he would get the right sized bolts. There was a guy in line who saw the lnb arm and said his brother free lanced on satellite installation problems so Bob got his number just in case. With the bolts in hand Bob drove back and installed the arm on the dish and mounted it to the tripod. He pointed it approximately in the right direction and using our cellphones Jo monitored the signal meters and if "0" was a good number we were golden. So Bob moved it slightly left and right and nothing either way.

Bob gave up and called the troubleshooter who will hopefully come out today. After awhile Bob remembered that at the last park a fellow camper was having trouble with his setup and wanted to check the settings from our automatic dish. They were vastly different than the ones he got from dishpointer.com. So Bob went out again with the new settings and "0" was our lucky number again. Luckily you can still watch your playlist without satellite reception so we relaxed and caught up on some of our shows and enjoyed an ice cream dish with hot fudge and Michigan cherries and blueberries.

We certainly hope it will be worth it, here is our view of the lake, a little foggy so hopefully will have better pictures later. 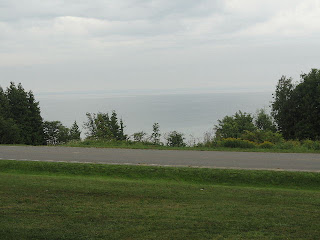 While here we plan to Whitefish Point and the Great Lakes Shipwreck Museum (Edmund Fitzgerald anyone), Soo Locks, Mackinac Island, and of course lighthouses, waterfalls, and just reading by the lake.