Ruth's Diner and a grocery store

With the unexpected heat wave of upper 80's and the road construction everywhere and the fact we probably couldn't park anyhow we feel like just taking it easy here in SLC. But one place we wanted to go to is Ruth's Diner so we went there for lunch yesterday, and we are glad that we did. Here is a photo of Ruth's Diner showing the canyon which I got off of the internet, the snow has melted by now. 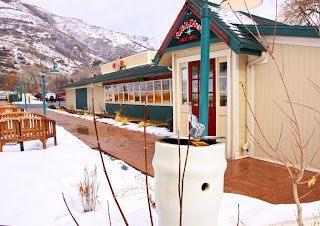 To be honest we had breakfast which included a fresh asparagus omelet, hash browns and pecan cinammon roll french toast. Each breakfast comes with a mile high biscuit which we ate with the what had to be homemade raspberry jam on the table and a side of gravy. Everything was excellet. As mentioned before this place was on DDD and while Guy Fieri was there they made baked mac-n-cheese which looked wonderful so we got that to go for supper. The biscuits were so huge combined with pretty good sized portions that we brought enough home for a breakfast in the future.

We then went to a Smith's Food away from downtown hoping for parking and it worked. Smith's is part of the Kroger's chain so it had a fuel discount program just like Frys so we bought a gift card and groceries to get us 10 cents off of a gallon of diesel which got us down to $4.059 which was much better than the last fillup at $4.399.

Back to the park to unload groceries and read until supper time where we had the Ruth's Diner baked mac-n-cheese which was excellent. What surprised us when we opened the package to warm it up was that it included veggies. The warmed up veggies were also wonderful, a mixture of squash, zucchini, onions red and green peppers. Add Ruth's Diner to your list when visiting SLC.

Since we can take a free shuttle to Temple Square from the KOA and not have to drive we may do that after breakfast today. Then Wednesday we are off to Idaho Falls where it looks cooler but also rainy.