As promised here is an entry on a great day we had in the Munising area with cool weather, waterfalls and a farmers market. On the way to breakfast we took a picture of Alger Falls which you can see from the highway. There is a small pullout area where you will usually see somebody stopping and taking a picture, today it was us. 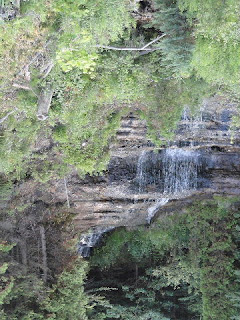 After a great breakfast at The Navigator we just had to take a picture of this Bank sign. For those that know us breakfast for us is later than most and about the time most are thinking of an early lunch. 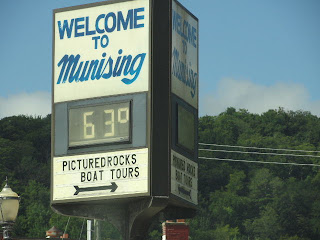 First on our waterfalls tour was Memorial Falls and Tannery Falls in the city of Munising. Of all the waterfalls in the area this had the worst sign indicating the location of the trail and the most undeveloped trail. We almost drove by the trail, in fact we did but Bob saw the sign between two cars in the rearview mirror. Memorial Falls trail takes you first to the top of the falls and then across and down to the base. The undeveloped trail is sloped downhill of course with only the steepest areas having a railing. The really cool thing is that the trail takes you underneath the falls and past the falls for some incredible shots. The trail past the falls took us to what may be Tannery Falls but since this is a spring time only falls we were not sure if what we saw was Tannery Falls. Here is Jo underneath Memorial Falls. Our photo album on Flickr.com has pictures of the trail and many more of the falls from all angles. 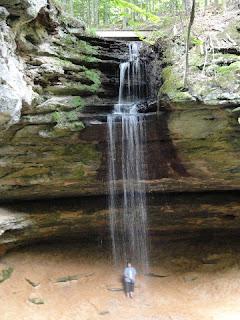 Next up was Horseshoe Falls which is the only falls in the area privately owned. The area around the falls includes other trails and a botanical garden and a trout pond, plus they have ice cream in the gift shop so we decided to pay the admission and we are glad that we did. We walked on well groomed trails and saw flowers and trees that had signs that told you what you were looking at. But the reason for going is Horseshoe Falls, named for the horseshoe shaped 2nd level of the falls. Over 1 million gallons of water flows over the falls each day fed by an underground spring. 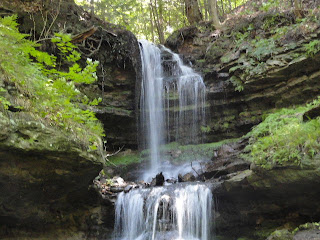 For those that remember the fun we had with the GPS on our arrival to Munising Wagner Falls is near where we pulled over and called the park for directions. A well groomed trail and a wooden landing with stairs near the falls is just a short walk away. Being so much further north the season for fresh fruit is noticeably later than we are used to. Strawberries were late and were just in a couple of weeks ago. Raspberries are just now coming in as are wild blueberries. Blueberries and cherries in the UP are a week or so away but are available from the lower peninsula or what the Yoopers call Da' Mitt. We have had great blueberries from roadside markets and from super markets making sure that they are from Michigan. We ended the day at a Farmer's and Artisan Market near the marina. We bought the best raspberries either one of us have ever had. Jo said she didn't know that fresh raspberries tasted the way that they did. We also got some farm fresh eggs and are hoping that blueberries and cherries come in soon. 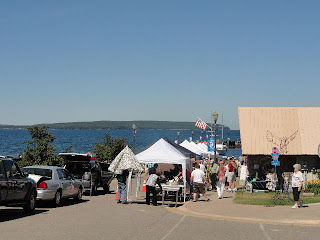 As we were driving back to the park we passed the same bank sign and took another picture to show the evening temperature. Another great day in the UP!!! 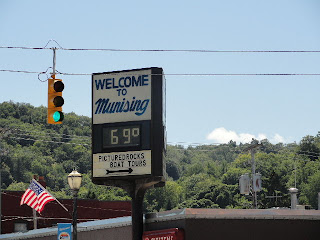