Our last day in Winslow we first ate at the Turquoise Room again. Since our two favorite breakfast meals are here we both ordered the same thing. Bob got the Arizona Green Chile Eggs which is creamy polenta in a pool of green chile and tomatillo sauce topped with two eggs, covered in melted jalapeno jack cheese and garnished with roasted corn salsa and diced fresh tomatoes, served with green chile potatoes and warm corn tortillas. Jo got the Corn Maiden's Delight which is a bowl of warm yellow corn polenta topped with fire roasted tomatoes, fresh spinach, two poached eggs, Jalapeno jack cheese and a fresh roasted corn salsa.

After our excellent breakfast we went to the Meteor Crater. 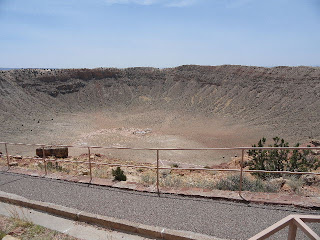 It has been said that it is hard to judge distances in the desert and Meteor Crater proves that old adage. Driving to the Crater and seeing the Crater from the parking lot we were kind of underwhelmed, it just did not look that big but we continued anyway and we are sure glad that we did. We first went through the displays which explained Meteor Craters and other craters. A lot of neat and informative displays to be seen here. Now Meteor Crater may not be the largest crater of the 150 or so known sites but it does have it's place in history as it was where meteors hitting the earth was first  proven and it is the best preserved crater on earth since the high desert climate kept erosion to the minimum.

Here are some other interesting facts about Meteor Crater:
- approximately a 154 ft meteorite struck approximately 50,000 years ago
- lies at an elevation of about 5,709 ft above sea level
- it is almost a mile in diameter and some 570 ft deep (a 60 story building on the floor would not reach the rim)
- the crater floor could accommodate 20 NFL or College football games with 100,000 fans per game or two million fans total
- due to its Moon-like conditions NASA Astronauts trained here in the 1960's to prepare them for the Moon landings, there is an Apollo Test Capsule on display
- The crater was used as the setting for the climax of the 1984 film "Starman"
- the site was formerly known as the Canyon Diablo Crater and fragments of the meteorite are officially called the Canyon Diablo Meteorites. Scientists also refer to the crater as Barringer Crater in honor of Daniel Barringer who was first to suggest that it was produced by meteorite impact. The Baringer family owns Meteor Crater.
- it is privately owned and is a National Natural Landmark (our first clue that it was privately owned was the 5 mile road to the crater was in excellent condition!)

As mentioned previously the first picture above is a little misleading as to how big the crater is. 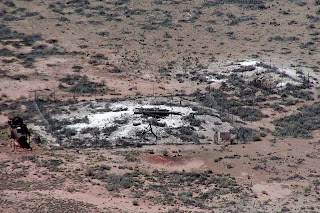 It is not until you see some evidence of construction in the area for drilling in the center of the crater that is a little whiter than the surrounding area and you zoom in. The cutout image of the astronaut near the flag is 6' tall and it is barely noticeable from the rim, dang it is barely noticeable here too. There is a huge boiler to the left that is also barely noticeable from the rim. We don't have a picture of it but one of the telescopes on the observation deck is pointed at a rock on the rim the size of a house but you could not tell that. We are very glad we took the time to visit Meteor Crater and hope other travelers do the same.

We stayed at Meteor Crater RV Park which is owned by the same group that owns Meteor Crater. Typical of high desert parks in Arizona and New Mexico there are gravel interior roads and gravel sites. The sites are level and there are 50a full hookups. We got a coupon at Quartzsite for a free second night but we really chose this park for its convenient location. It is 5 miles to Meteor Crater, 20 miles to the Turquoise Room and Homolovi Ruins, 25 miles to Walnut Canyon National Monument, and 35 miles to downtown Flagstaff. If we are ever in the area we plan to stay here again.

Photos have been added to the Winslow 2001 set on Flickr.com here