This is why we hesitate to recommend food

Believe it or not we don't blog about some of the places that we eat at and like because sometimes one visit can be a fluke and not a regular occurrence. That is why we generally have a rule of 3 visits before we blog about food or add to 'Our Favorite Things! (Food)'. We almost blogged about the new Hash Brown Stacks at IHOP after only one visit because we have eaten there before and generally get good food.

The first visit was a dream, crisp hash browns covered with sauteed spinach and mushrooms, melted provolone cheese and an over medium egg and then covered in hollandaise sauce. Jo just got that with pancakes and Bob added ham to the plate and pancakes. The portions were large enough to take the pancakes home for breakfast the next day. A very enjoyable meal that was blog worthy. 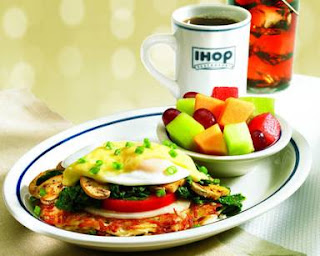 The second visit was vastly different for many reasons; Bob's egg looked like a half moon, Jo didn't have any mushrooms at all, the ham was overcooked and a little dry, and the portions were much smaller so we ended up eating the pancakes there. We did mention about the mushrooms to the waiter and he did offer another portion or sauteed mushrooms but Jo does not like to be a bother, she just wanted to let them know about it. We would have felt bad if we recommended this and anybody got the second meal instead of the first, our reputations would have been tarnished, 'Our Favorite Things! (Food)' would be meaningless. :-)

In spite of all that was wrong with the second visit it was good enough, and the memory of the first visit was still there, that we will try the Hash Brown Stacks at IHOP at least one more time.