Full-timing with cats; A Kodak Moment

Unfortunately without a Kodak. Living with 3 cats is interesting; full-timing with three cats is an adventure. Cats are known to be very inquisitive and an open cabinet door or an open hole in the wall (more on that later) are an invitation they just cannot pass up.

We have tons of photos of our cats getting into the pantry or cabinets or closets but this was a first. Bob was replacing our LP/CO detector and when he pulled out the old one he left a 3" x 6" hole. The connector used was a crimped one and not a removable wire nut so Bob went hunting to see if we had some. Coming back to the doorway where the detector was mounted Bob saw a cat sniffing at the hole and cat hair around the hole. When you live with three cats in 359 sq. ft. seeing cat hair everywhere is not an immediate alarm but we decided to count noses and could only find 2 cat noses. Sure enough Sandra had wedged herself through the hole. Luckily she is a chow kitty so we just had to get the treats and she was ready to come back through. Well what goes through the hole of course does not come back quite as easily. Squalling like a stuck cat for her treats she finally realized both legs had to go through first and then she was back through. We blocked the hole until Bob could finish.

Once we were done we realized we should have taken a picture but we were in a little panic especially when she tried the first couple times and failed. We were not about to let her try again just to get a good photo op. Here are a couple of photos of Sandra's adventures in cabinets. 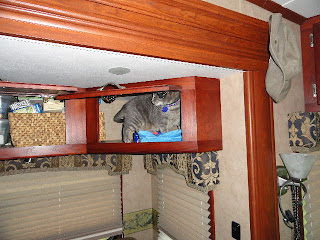 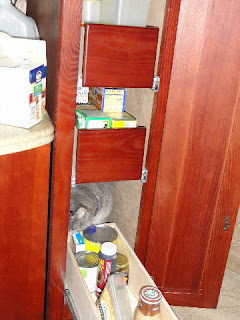