We did not do much blogging in South Dakota as we were on the go so much so this is intended to catch up on our South Dakota fun.

Our first stop was Chamberlain which was really a brief stopover. There is a can't miss sight to see nonetheless, the Rest Stop near Chamberlain which houses a free museum to Lewis and Clark who camped here on the way west and the way home. This is a very good museum and would be worth an admission fee. We had a very good burger and pie at Al's Oasis while in the area.

We next journeyed to Custer which gave us a good locale to visit both Mount Rushmore and the Crazy Horse Memorial. We camped at a really nice park, Broken Arrow Campground and Horse Camp, which is outside of Custer. With the remoteness and the views of the Black Hills and the horses this is one of our favorite campgrounds.

We were so excited to see Mount Rushmore which has been a wish for us for years but we were a little nervous thinking that no way could it live up to our expectations. Not to worry Mount Rushmore was amazing. From Custer we took the Iron Mountain Road through Custer State Park. The Iron Mountain road is known for single lane tunnels cut into the rock that provide dramatic views of Mount Rushmore. 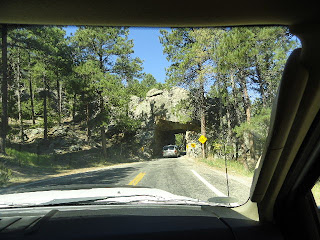 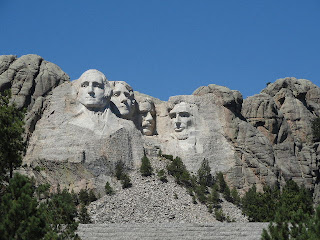 The visitors center had a film and the exhibits were neat. We walked on the Presidents Trail which took you to the base where you  look right up George's nose. 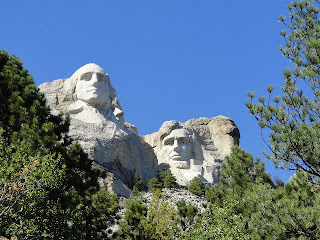 We next visited the Crazy Horse Memorial. The scale of which is amazing, the four Presidents could fit on what will be Crazy Horse's hair just to the left of the finished face. 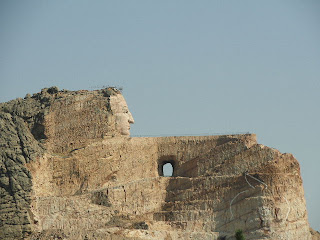 When finished Crazy Horse will be taller than the Washington Monument. It is interesting to see the sculpture of what it will look like when finished. 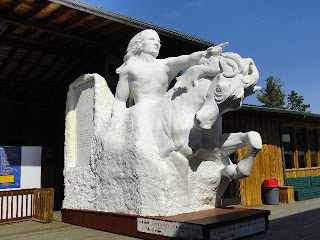 Another interesting fact is that this is all private funding, no government funding has been accepted or ever will be accepted. Korczak Ziolkowski who started sculpting in 1948 had previously worked on Mount Rushmore. A lot of people may not know that Mount Rushmore is an unfinished work since government funding ended and Korczak did not want that fate for the Crazy Horse Memorial. Since his death his wife and children have continued the work and have maintained that philosophy. There is more than just a mountain carving as the site has a great visitors center and museums and sculptors studio, etc.

We took a bus tour which allowed us to get even closer. Plan on spending a whole day here as this site is amazing. 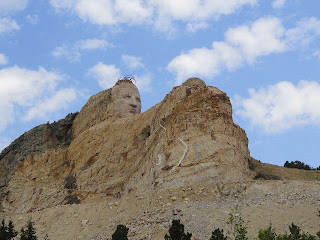 Custer also has some great places to eat; Our Place and the Baker's Bakery and Cafe were excellent for breakfast. The highlight eating wise though had to be the Purple Pie Place which has the best Strawberry Rhubarb pie we have ever had, this may be the best pie place ever.

After much to short a time in South Dakota we are now in Wyoming, adding yet another state to our states visited map.

Photos have been uploaded to the Chamberlain and Custer photo sets on http://www.flickr.com/photos/bobandjotravel/sets/

We will definitely have to return to South Dakota and the Black Hills. With such a short time we barely scratched the surface of things to see. Someone told us that you could spend a month in the Black Hills and still not see everything and we now believe that.