While waiting for our food we discussed how much we like the Old Spaghetti Factory and kidded that we might have full-timed just so we could drive around the country to all the locations. It certainly is an advantage of full-timing to be able to eat at your favorite places no matter where they are located.

We both like the Mizithra cheese which you can get "ala Homer", simply browned butter and the Mizithra cheese. This is what Jo got this time and Bob got the Manager's Favorite which is 1/2 Mizithra and 1/2 meat sauce. They also have a creamy pesto salad dressing that is really good. The Old Spaghetti Factory is one of our favorite places to eat and if there is one in the area where we are staying you know we will eat there at least once. 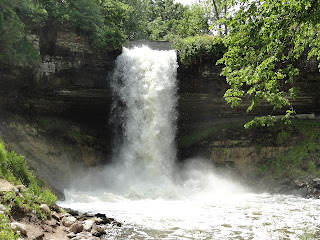 "Song of Hiawatha" where Hiawatha and Minnehaha, the characters from the poem:


Over wide and rushing rivers

In his arms he bore the maiden. 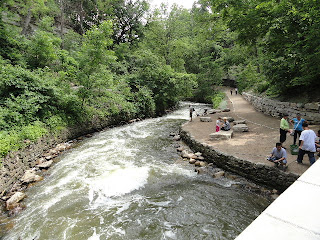 Minnehaha Falls is in Minnehaha Park which is a city park in Minneapolis Minnesota. There has been a lot of rain recently so the 53-foot waterfall looked really impressive and the creek was roaring. We were talking with some friends who tried to lessen our expectations because during droughts the flow can slow to a trickle to nothing at all. But this was no drought time and to hear the water crashing down and to get hit with the spray on the walkway left both of us glad that we drove to this park.

There are walking trails in this 193 acre park along with the Stevens House, the Minnehaha Depot, and the Longfellow House where you can get a history of the park. A neat city park and a very nice waterfall.

Photos from this visit have been uploaded to Flickr.com