With the potential for rain in the next couple of days we decided to do a couple of things that we really like to do, in addition to eating that is. Ever since our first ride on a ferry in Washington we have enjoyed them.  Bayfield is near the tip of the Bayfield Peninsula and right next to the Apostle Islands archipelago. We took the ferry from Bayfield to La Pointe on Madeline Island. 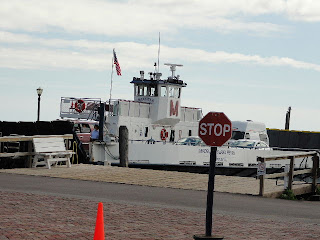 Madeline Island has a rich history, and is the largest of the twenty-two islands making up the Apostle Islands, and the only island accessible by ferry. The Island is named after Madeleine Cadotte, daughter of Chief White Crane and wife of fur trader Michael Cadotte. Madeline Island has flown the flags of three nations and has been the site of some civilization for about 400 years. The first European contact.was Etienne Brule, a French explorer, who visited Madeline Island about the same time as the Pilgrims landed at Plymouth Rock. Ferries have run from Bayfield to La Pointe for nearly a century and a half.

After breakfast we boarded the ferry and then took a driving tour of Madeline Island. We could not have asked for a better day, starting out a little cloudy but clearing up and a temperature of 70 degrees, although about half way there and back it got real chilly on the ferry. There are paved roads and dirt road that were in pretty good shape. Driving we were able to walk on the beach at the end of the paved Big Bay Road and visit Big Bay Town Park and Big Bay State Park, but for the most part the drive was a two lane road through a forest with just a glimpse here and there of the water. If you ever wanted a cabin in the woods right on the water of a nice clear lake this is the place. We saw waterfront lots for sale along with spots with cabins.


Big Bay Town Park is about 7 miles from the ferry and features a nice sandy beach and rustic camping. 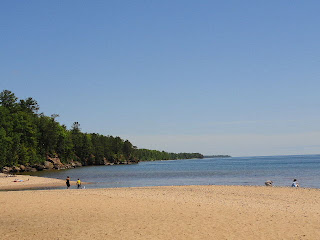 Big Bay State Park is about 5 miles from the ferry and is a 2,350-acre park that has a 1.5-mile beach and more than seven miles of hiking and nature trails with incredible views of Lake Superior. If you have followed our journey so far this year you may have noticed that we have encountered a lot of rain and this area is no different. We walked along the trails about as far as we could until we reached a spot that was water and mud as far as you could walk either to the left or right so we turned back. We still got some incredible photos of the scenery. 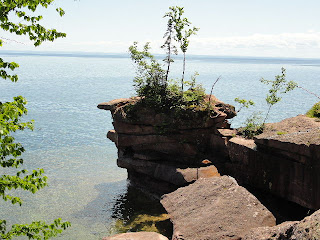 By now it is time for lunch so we drove to La Pointe. We stopped at the Chamber and the gal there recommended The Pub. So we walked down to The Pub and got a table with a nice water view. Jo got the Garden Brie Sandwich which is marinated tomatoes & peppers, garlic aioli, brie cheese and fresh basil. Bob got the fresh Whitefish Sandwich which was lightly breaded & sautéed. For side dishes we both got their version of a pasta salad which added broccoli and bacon and diced tomatoes with a cole slaw like dressing. Everything was wonderful.
We then walked around downtown La Pointe until we took the ferry back to Bayfield. This is such a great place to visit we will probably go again but this time just walk on, visit the Museum which is supposed to be real cool and see more of downtown La Pointe and of course get a good meal.
Photos have been uploaded to Flickr.com
Till next time,
Bob and Jo