Thought things would be different when full-timing

We really thought things would be different after we started full-timing and a lot of things are. We are seeing great places and meeting new friends while connecting with old friends and family. But unfortunately one thing is still the same; it still takes about 3 trips to the RV/hardware stores to get everything figured out for a DIY repair.

The first two years we owned our RV we were under a bumper to bumper warranty so Bob just sat and watched as the work was being done. We are now past the warranty period so Bob is now the RV tech. We started having toilet problems, the seal in the tank was causing slow foot pedal action and it was starting to leak around the seal. Replacing the seals went pretty good considering that the instructions said there would be four (4) mounting bolts for the tank to base. Turns out there were only two (2) but it took a phone call to Thetford to confirm that.

With the toilet back together with new seals and bolted to the floor so all is well right, not quite. Turns out there were two problems with the seal and the foot pedal and Bob only fixed the seal. To fix the pedal the arm had to be removed, all of this could be done with the toilet still attached to the floor which was good news. Taking the arm off of course was harder than it was supposed to be. Then there was a drive shaft that had to be pulled out and the excess grease removed from the shaft and the hole. But this just could not be accomplished even with a phone call to Thetford and a lot of grunting. So fine, put it back together and deal with it the next day. The arm snapped right back on with a convincing click, that is until you used the foot pedal and it fell off. So it was off to the RV store to get a new toilet. We wanted to get the exact model so the hookup would be easier but of course that model was not in stock at the RV parts store.

Now Bob tried to make sure that he had enough parts to finish the job. Of course the water supply for the old toilet would not align with the new one so with three plastic couplings and a 1/2" plastic tube and a new toilet Bob headed home, but first he stopped at Ace Hardware for a flexible hose to see if that would work. Turns out the shortest hose available was still too long for the small space behind a RV toilet. The next trip to the RV parts store was due to the fact that the cramped spaces made a tube length that put the two plastic couplers back to back with no way to pry them apart. If they leaked Bob did not want to find that out AFTER the store was closed thus having no toilet for the overnight period which Bob visits a few times. Bob got there moments before the store closed.

Turns out the junction did not leak and the toilet was installed with no further incidents but it still took three trips to complete the job. Funny how some things never change. 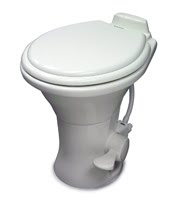